As the days grow shorter and colder, it is the time of year when you look forward to whiling away a few hours in one of the many cosy rural pubs and inns of  Lakeland – what is better than having a local brew in front of a roaring fire after a brisk cold winter walk?

The Lake District is well known for its wonderful hostelries and also has a great reputation for its locally sourced and produced ales and alcohol. As well as tasting the local products, there are a number of visitor centres and brewery tours which provide an interesting way to experience how these products are made and of course, to sample some of them. Here’s our guide to some of the best.

The Lakes Distillery opened in December 2014 on its idyllic rural site near Bassenthwaite. It has a visitor centre, artisan bar and bistro, and a shop selling 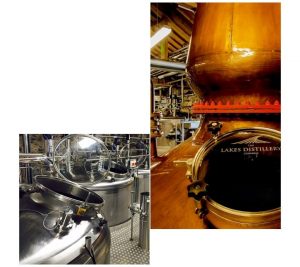 distillery products as well as locally produced goods. At the visitor centre you can find out how the Lakes Malt, Lakes Gin and Lakes Vodka are made, and have a tour of the site including the still room and the distillery’s warehouse where the whisky matures. It includes a video following the water used for the spirits from the River Derwent as it flows down from Sprinkling Tarn through Keswick into Bassenthwaite Lake and on to the Irish Sea.

The distillery is based at a refurbished model farm. The main barn houses the mash house and still house, with unique stills carefully designed to produce the spirits on a small artisan scale. An old cattle shed has been converted into the warehouse, with further cattle sheds being transformed into the shop, bistro and bar.

Tours conclude in the Tasting Room where guests can try the product of the distillery. Standard tours are £12.50 for adults and £5 for 13-17 year olds accompanied by an adult.

Our own town hosts a great brewery and has a brewery tour where you can find out about how the beer is made. The visitor area has the original sandstone flagged floor and beams and it has a well stocked shop.  You can enjoy a bee, including the recently gold winning Dark Horse in their Flying Fox Bar where it is brewed.

Brewery tours cost £10 and take place Monday to Saturday 11am and 2pm and they usually last approx 1 hr. Booking is advisable.

Jennings have over 190 years of brewing history in Lorton and then latterly, in Cockermouth. They produce some of the best known ales around( Cock A Hoop, Cumberland, Sneck Lifter to name a few). Tours of their large facilities in the Castle Brewery take around 1.5 hours and include your choice of 3 half pints of ale in the Old Cooperage bar, along with some local chutney.

The Hawkshead Brewery began in 2002, in a barn just outside the village of Hawkshead. Initially brewing on a 7 barrel, second hand kit they create highly hopped cask beers. In 2006 they relocated to the Mill Yard, beside the River Kent at Staveley, half way between Kendal and Windermere. They now brew in a new 20 barrel brewhouse and have built a brewery tap – The Beer Hall. At full capacity, they produce 6,700 barrels (1.1 million litres) per year.

They run scheduled tours of the brewery every day at 1pm allowing you to enjoy lunch in The Beer Hall before or after your tour should you wish. The tour includes a short film and lasts around 45 minutes. The cost of a brewery tour is £10.00 per person and includes either a pint or two halves at the end of the tour.

Although brewery tours are not available at the following sites, they are worth noting for the exceptional produce. Some have facilities to sample their produce and others are available more widely in outlets across the Lakes.

You are able to sample the produce at Ennerdale Brewery’s in their Brewery Tap. Their beers start with only four ingredients – water, malt, hops and yeast. The water is naturally pure and soft from the valley of Ennerdale. They use the finest malts, freshly kiln-dried and milled for them and their hops are whole-leaf, dried hops. Their yeast is developed from one of the longest established English Ale Yeasts, and they harvest yeast from each fermentation to use in the next brew, maintaining the distinctive flavours.

Their beers are fermented for a week, then carefully transferred to racking and conditioning vessels for up to six days, depending on the recipe.

A café by day and bistro by night, the Brewery Tap serves delicious, homemade food. It also hosts a wide range of events, in a family orientated atmosphere, where kids can chill out and enjoy some parent free time in the children only corner.

The history Cumbrian Legendary Ales dates back to 2003 when the Loweswater Brewery was set up using a small 3 barrel kit. It was sited in an outbuilding at

the Kirkstile Inn owned by Roger and Helen Humphreys and initially just supplied the pub in Loweswater. Demand grew dramatically from other pubs and for festivals. In 2009, the Loweswater Brewery, acquired Cumbrian Legendary Ales. This 10 barrel brewery had been established on the shores of Esthwaite Water near Hawskshead in. All brewing was eventually transferred to Hawkshead.

In the last few years the brewery has experienced a period of rapid expansion. The capacity of the brewery has been increased and the brewery currently brews around 50 barrels a week (a barrel is 36 gallons). In 2011, Loweswater Gold became Champion Golden Ale of Britain and the following year Langdale won silver in the same competition. A large number of outlets in Cumbria and beyond are supplied.

Drawn back to the magnetic landscape he loved as a young man, Vince Wilkins was inspired to create a gin that captures the enduring beauty of the Lake District. Working with a master distiller, Vince perfected a unique blend of botanicals distilled with Cumbrian kiln–dried oak bark, and so in 2008 Bedrock Gin was born. Bedrock is award winning and is singularly smooth. Enjoy its blend of vibrant botanicals with premium tonic water mixer, ice, a slice of lime and a garnish of basil.

We hope you enjoy some of the ales and gin produced in the Lakes and look forward to seeing you here soon. We can add a few more to this list, but also see this recent Telegraph Article on some of the top pubs and Inns in the Lake District.